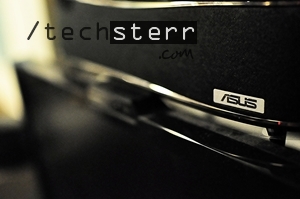 There are a lot of things to like about having a decent sound system connected to our personal computer or a laptop to take advantage of the enjoyment a video game or a movie can give us. As for me, I always enjoy the good and crisp surround sound of a 5.1 speaker system that is currently on my home theater setup but it seems that having 5 or 6 speakers scattered all over my personal computer is not practical at all considering that I only allot a small space for my pc workstation.

Let’s take a look at its specs after the break.

Lets take a closer look at its contents.

Cine 5 is not that complicated to boot out of the box. You just basically plug the power cable and the three stereo mini-jack sockets at the back of the unit and push the power button at the back.

Unlike the conventional 5-channel speaker systems, Asus Cine 5 doesn’t require any calibrations and it mainly controls by the dial installed at the top that glows a sleek blue light when powered.

The dial serves as the master volume for the Asus Cine 5. I found this really sleek as you wont feel like this thing will eat you out when using it. A push of the dial turns the unit into sleep mode which is useful when you’re in a hurry to turn it off and plug it out of the socket. Also, make sure that the proper jack is connected to the right socket. The three stereo mini-jack sockets are color coded to match the socket slots of your sound card. You also might need to set your sound card driver to 5.1 (read your soundcard/motherboard documentations on how to turn it on).

I was really awed the first time I saw the Asus Cine 5 as it claimed to be delivering a “true cinematic surround sound“. My initial testing was with a movie (I tried Black Hawk Down just as to grind its surroundability) and I was really surprised that the sound was indeed surround and crisp! I can exactly hear a sound on the left side of my ear when there is something going on to the left of the screen allowing me to pinpoint where the action is going. I can also clearly hear the actors’ voices up front regardless of the fact that there are no visible rear and front speakers. The same goes for gaming. I tried playing  Team Fortress 2 and it delivered a crisp and clear sound without any distortion.  The movie and the game I tried definitely put the Cine 5 to the test and it delivered exceptional results.

Music playback is somewhat “just” fine and Asus Cine 5 handled it in a different way. I tried playing back different audio formats and different genres and it delivered surround clear sound but less the bass(y) kind of stuff. Its understandable though considering its compact size and it actually uses full range drivers which can produce a not so desirable sound on some media type that is being played.

In conclusion, Asus Cine5 is a great soundbar product that offers a true cinematic surround sound. They really stays true to that promise in many ways. It can disappoint you though at times as it lacks a really deep bass that you might be expecting but it really boils down to what media type is being played back. Asus may have this as an answer for those who prefers a sleek, compact and a hi-fidelity sound system. It just does everything it should do for such people’s purpose but this might not be the best choice if you prefer a more bassy setup. Otherwise the Cine 5 is a real performer. It outstands even my then 2.1 setup big time!